Elvin Jones & the Spirit of Trane

Elvin Jones- a messiah among jazz drummers- playing exactly what he knows and loves. That’s what you can expect when listening to the 1968 Blue Note album Puttin’ it Together. This album comes just a year after the death of John Coltrane, in whose quartet Jones and bassist Jimmy Garrison made their names. Elvin Jones called Trane “a very deeply sensitive and religious person…a perfect foil for my ideas” (Gray, Different Drummer: Elvin Jones). The spirit of John Coltrane can be felt in the simplicity and sincerity of the tunes and the passion that Jones and Garrison pour into each track. With most of the tunes hardly having a chord progression at all, the creativity and spirituality of the players has a chance to come through unencumbered.

All this talk of John Coltrane is not to diminish the contribution of saxophonist Joe Farrell at his most fearless. When this album was recorded, Farrell was beginning to his transition from a reliable side man to a solo artist with his own profound statements to make. Although Farrell’s ideas are more academic than Trane’s, he aptly straddles the technical and spiritual through the sheer energy of his approach.

The first track, an arrangement of Ruy Guerra and Edu Lobo’s “Reza”, sets the tone for this outing. Coming fresh off chordless outings with Sonny Rollins and Ornette Coleman, Elvin Jones is immersed in the postmodern aesthetic of 1960s post-bop. Guerra and Lobo’s lush harmony and complex form are stripped away, leaving just the soul of the original. The tune begins with Elvin’s hypnotic latin groove. Then Jimmy Garrison enters with an ostinato that establishes the character of the arrangement.

Joe Farrell plays part of the A section as an introduction, then quickly jumps into the mantric prayer portion of the tune The “prayer” repeats and Jones and Garrison explode into a hard swing. Farrell’s solo is a masterclass in how to generate interest with just two alternating chords. Whole tone scale… triad pairs… he throws in everything but the kitchen sink, barreling into the drum solo with a flurry of energy. Jones’s virtuosity is on full display with rapid triplets on the snare serving as backdrop to his exploration of the bass drum and toms.

Each member contributes one composition to the session. Jimmy Garrison’s “Sweet Little Maia”, dedicated to his daughter, is plodding and playful. Shades of Ornette Coleman’s harmolodics as Farrell’s soprano, Elvin’s brushes, and Garrison’s steady walking bass swirl around in collaboration. Garrison’s solo retains a steady groove while his iconic double stops interject for a conversational effect.

Next, Elvin Jones’ composition, “Keiko’s Birthday March”, written for his wife, features an rhythmically exciting melody. Joe Farrell’s fiery bebop piccolo playing is a highlight of the album. Elvin Jones shows off his creative flair with a rhythmically unorthodox solo, ending with a cheeky drum cadence back into the head.

Next is Village Greene, a typical minor blues with rhythmic interplay between Jones and Farrell. Then Farrell’s original, “Jay-Ree”features technically challenging head, an urgent energy, and plenty of room for interaction between legends.

Although the John Coltrane Quartet were known for their daring, explosive music, they tended to treat ballads as sacred. Their traditional, sincere approach to classic tunes is iconic, but perhaps underrated. Because of this, it should be no surprise that the trio plays the standard “For Heaven’s Sake” pretty straight with Joe Farrell’s quartal inflections on flute adding a slight modern flair.

Finally, the trio closes with Jimmy Heath’s Gingerbread Boy, which Miles Davis’ Second Great Quartet famously recorded just one year prior. This version stays faithful to Jimmy Heath’s original recording. Farrell’s solo is quirky and rhythmic with a perfect blend of tradition and exploration. Jimmy Garrison astounds with his characteristic double stops and Elvin Jones’s muscular approach is on display as he trades fours with his bandmates.

This classic is at once minimalist and vast- offering the very best of profound, sincere musicianship. The presence of Elvin Jones and Jimmy Garrison make this a must for dedicated jazz enthusiasts and the accessibility that Farrell provides makes it very approachable for those new to jazz. This trio recorded another album in the same year, called The Ultimate, that is also worth checking out, and of course each of these musicians continued to make striking and important recordings.

Listen to Puttin’ it Together on Spotify or Apple Music

Quotes from the following:

Title: Puttin’ it Together 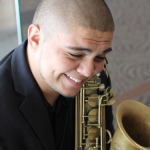 By Jenifer Dale 10 hours ago

By Jenifer Dale 1 week ago

By King Coppo 3 weeks ago

East of June: A Candid Conversation

By Lauren Wood 3 weeks ago