“Do people still use that old aphorism “Shoot for the moon and [you’ll] land in the stars”? Well, Midwest pop-punk mavericks Wilmette have loaded their pop-punk rocketship with the fuel to get them out there.”

Peyton Day (bass/vocals) tells Alternative Press: “This [Wilmette’s] video is supposed to be the epitome of hindsight in a relationship. As the aliens rummage through the crashed spaceship, they find a log of events that detailed how the astronauts crashed into their planet. They know they were too late in helping, and all they can do is watch the aftermath. Only two-fifths of the group come back, signifying a change in their reality, while the aliens are obviously unscathed.”

Hailing from the Chicago suburbs, Wilmette combines pop-punk and hardcore with a fresh style that relies on pop hooks, honest lyrics, and strong musicianship. [Our] band’s emphatic label debut “Anxious Body” was produced by Seth Henderson at ABG Studios (Knuckle Puck, Real Friends) and mastered by Kris Crummett (Sleeping With Sirens). The single is now streaming on all digital platforms. 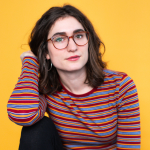 I am a writer, actor, and comedian living in Brooklyn. I co-run an online satirical publication called Humor Darling and am also a lifestyle contributor for Subvrt Mag.

By Amara Henley 6 hours ago

By Lauren Wood 19 hours ago

By Ashley Eady 2 days ago